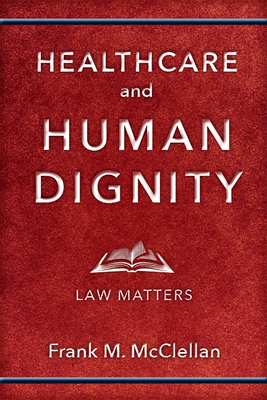 
Special Order—Subject to Availability
The individual and structural biases that affect the American healthcare system have serious emotional and physical consequences that all too often go unseen. These biases are often rooted in power, class, racial, gender or sexual orientation prejudices, and as a result, the injured parties usually lack the resources needed to protect themselves. In Healthcare and Human Dignity, individual worth, equality, and autonomy emerge as the dominant values at stake in encounters with doctors, nurses, hospitals, and drug companies. Although the public is aware of legal battles over autonomy and dignity in the context of death, the everyday patient’s need for dignity has received scant attention.  Thus, in Healthcare, law professor Frank McClellan’s collection of cases and individual experiences bring these stories to life and establish beyond doubt that human dignity is of utmost priority in the everyday process of healthcare decision making.
Frank McClellan is a professor of law emeritus at the Beasley School of Law, Temple University, Philadelphia. He is the author of Medical Malpractice:  Law, Tactics and Ethics (Temple University Press, 1994) and co-author of Tort Law: Cases, Perspectives, and Problems (LexisNexis, 1991-2007).
"This is an excellent book. The stories are terrific, the analysis pitched just right, and the underlying themes of fair treatment, dignity, and inequality of treatment based on race are well-developed."

"Engaging, conversational, thought-provoking...McClellan's writing blends ethical arguments, a lay person's understandings of dignity, and legal frameworks very well. I felt as I was reading that someone was clearly and carefully walking me through stories about human dignity, medicine, and the law. His is a very humanistic legal gaze."

"McClellan...maintains that violation of the trust between physician and patient may result from conscious or unconscious bias against a specific group of people. Such violations repeat themselves in part due to the short memory of the public. Within this context, McClellan also stresses that the rule of law is central to protecting human dignity when patients are seeking health care. The negative influence on human dignity of racism, limited access, high cost, and power relationships in health care is at the heart of McClellan's argument. Recommended."
— Choice