From Popular to Insurgent Intellectuals: Peasant Catechists in the Salvadoran Revolution (Hardcover) 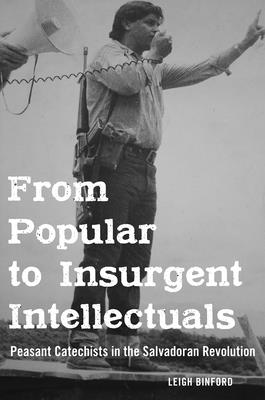 From Popular to Insurgent Intellectuals: Peasant Catechists in the Salvadoran Revolution (Hardcover)


Special Order—Subject to Availability
(This book cannot be returned.)
From Popular to Insurgent Intellectuals explains how a group of Catholic lay catechists educated in liberation theology came to take up arms and participate on the side of the rebel FMLN during El Salvador’s revolutionary war (1980-92). In the process they became transformed from popular intellectuals to insurgent intellectuals who put their organizational and cognitive skills at the service of a collective effort to create a more egalitarian and democratic society. The book highlights the key roles that peasant catechists in northern Morazán played in disseminating liberation theology before the war and supporting the FMLN during it—as quartermasters, political activists, and musicians, among other roles. Throughout, From Popular to Insurgent Intellectuals highlights the dialectical nature of relations between Catholic priests and urban revolutionaries, among others, in which the latter learned from the former and vice-versa. Peasant catechists proved capable at making independent decisions based on assessment of their needs and did not simply follow the dictates of those with superior authority, and played an important role for the duration of the twelve-year military conflict.
LEIGH BINFORD is Professor Emeritus at the CUNY College of Staten Island and the CUNY Graduate Center in New York City. He is the co-author with Scott Cook of Obliging Need: Rural Petty Industry in Mexican Capitalism, and is the author of The El Mozote Massacre: Human Rights and Global Implications, and Tomorrow We're All Going to the Harvest: Temporary Foreign Worker Programs and Neoliberal Political Economy.
"By showing us the complex interplay between peasants, peasant catechists, liberationist priests and guerrilla commanders, Binford’s study will become the foundational reference point for questions on the origins of peasant revolutionary consciousness in El Salvador."
— Erik Ching

"By telling the life stories of peasant catechists in El Salvador, this remarkable historical ethnography by Leigh Binford situates the readers in the world of these important actors during the armed conflict of the 1980s. Binford’s work deepens our understanding of how the teachings of Liberation Theology had a unique impact on the process. This book is history from below at its best."