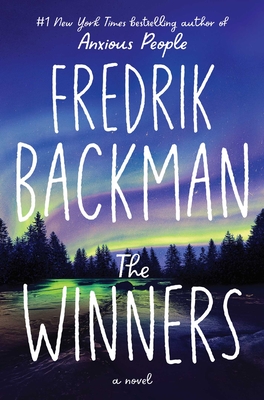 “I savored every page, every word of this well written story of a hockey community; love, death, marriage, human nature, and all for the love of Hockey. Fredrik Backman will take you out of the cold and into your heart.”
— Karen Piacentini, Fenton's Open Book, Fenton, MI

A breathtaking new novel from the #1 New York Times bestselling author of Anxious People and A Man Called Ove, The Winners returns to the close-knit, resilient community of Beartown for a story about first loves, second chances, and last goodbyes.

Over the course of two weeks, everything in Beartown will change.

Maya Andersson and Benji Ovich, two young people who left in search of a life far from the forest town, come home and joyfully reunite with their closest childhood friends. There is a new sense of optimism and purpose in the town, embodied in the impressive new ice rink that has been built down by the lake.

Two years have passed since the events that no one wants to think about. Everyone has tried to move on, but there’s something about this place that prevents it. The destruction caused by a ferocious late-summer storm reignites the old rivalry between Beartown and the neighboring town of Hed, a rivalry which has always been fought through their ice hockey teams.

Maya’s parents, Peter and Kira, are caught up in an investigation of the hockey club’s murky finances, and Amat—once the star of the Beartown team—has lost his way after an injury and a failed attempt to get drafted into the NHL. Simmering tensions between the two towns turn into acts of intimidation and then violence. All the while, a fourteen-year-old boy grows increasingly alienated from this hockey-obsessed community and is determined to take revenge on the people he holds responsible for his beloved sister’s death. He has a pistol and a plan that will leave Beartown with a loss that is almost more that it can stand.

As it beautifully captures all the complexities of daily life and explores questions of friendship, loyalty, loss, and identity, this emotion-packed novel asks us to reconsider what it means to win, what it means to lose, and what it means to forgive.
Fredrik Backman is the #1 New York Times bestselling author of A Man Called Ove, My Grandmother Asked Me to Tell You She’s Sorry, Britt-Marie Was Here, Beartown, Us Against You, and Anxious People, as well as two novellas and one work of nonfiction. His books are published in more than forty countries. He lives in Stockholm, Sweden, with his wife and two children. Connect with him on Facebook and Twitter @BackmanLand and on Instagram @Backmansk.
“Backman leaves no emotion unturned, sweeping up the reader in riveting family dramas that jump the boundaries of hockey-town rivalries. Another winner.” —Library Journal (starred review)

“Fredrik Backman is known for his engrossing page-turners, and his latest novel follows suit...A story of revenge, loss, and forgiveness.” –Woman’s World

"Beartown has been the backdrop to some of the darkest dramas of the human heart, but there are still more secrets, rivalries and resentments to contend with in this final installment." —Bookpage

"[A] dramatic and highly satisfying novel, building on themes introduced in the first two books and brilliantly drawing the reader deeply into the story. The translation is nimble and idiomatic, perfectly conveying Backman’s love of language and his wonderful sense of humor. If this really is the last Beartown novel, it’s a hell of a conclusion to an outstanding series" —Booklist, starred review

“Everything Backman’s pen touches oozes with insight and heart. The Winners is sure to be another winner.” —Amazon Book Review

“An often dark, moving story...The book, which works as a standalone read, begins with a devastating storm that leaves a path of destruction in its wake, adding heat to the simmering rivalry between Beartown and the nearby, less-prosperous town of Hed. It’s a world full of both conflict and kindness, where, as the narrator notes, ‘sport is about much more than sport.’” —AARP.com