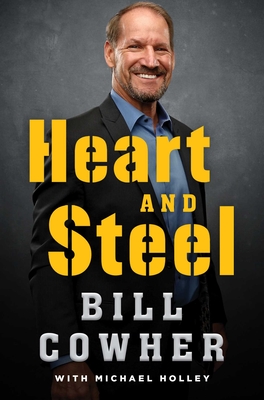 By Bill Cowher, Michael Holley (With)


Not On Our Shelves—Ships in 1-5 Days
A poignant, inspirational story about football, family, and love from Bill Cowher, the Super Bowl–winning, Hall-of-Fame Pittsburgh Steelers coach, and cohost of CBS’s The NFL Today.

Born and raised just fifteen minutes from old Three Rivers Stadium, it was in Crafton where the foundation of Cowher’s irrepressible work ethic, passion for teaching, and love of football and the Pittsburgh Steelers were built. Now, for the first time, Cowher will shine a light on a life filled with success, achieved through will and resilience in situations which, often times, appeared to be hopeless.

In Heart and Steel, Cowher will take you on his journey from childhood to the undersized, mohawked, disco-dancing North Carolina State linebacker, to fighting for a spot as a “bubble player” with the Browns and Eagles, before injuries ended his playing career. Bill will discuss how that same drive led to his big coaching break, running Special Teams for Marty Schottenheimer and the Cleveland Browns at just twenty-seven-years-old, before taking over the Pittsburgh Steelers just seven years later. Cowher will reveal exclusive, never-before-told anecdotes and candid thoughts on the biggest games, players, and moments that defined his fifteen-year Steelers tenure.

But this is more than a “football story.”

In 2010, Bill lost his beloved wife, Kaye, and father, Laird, within three months of one another. It forced him, yet again, to summon that resiliency to unearth a stronger version of himself—not only so he could march on, but to add a deeper level to the loving, supportive father his three daughters had always known.

Cowher’s learned many lessons in his life; as a father, grandfather, husband, coach, and broadcaster. He will show you how you can continue to grow by embracing transition, personally and professionally, through renewed perspective and social consciousness.

“Billy from Crafton” has come a long way. Through love and conviction, Cowher’s achieved more than he ever could have dreamed of. You can, too, with the same heart and steel.
Bill Cowher coached the Pittsburgh Steelers from 1992 through 2006, winning Super Bowl XL. He’s one of only two coaches in NFL history to lead his team to the playoffs in each of his first six seasons and, at the time, was the youngest coach to ever a lead a team to the Super Bowl. Cowher currently serves as cohost of CBS’s The NFL Today. In 2020, he was inducted into the Pro Football Hall of Fame. Cowher lives in New York with wife, Veronica. You can follow him on Twitter @CowherCBS.

Michael Holley is a six-time New York Times bestselling author and former columnist at The Boston Globe. He currently works for NBC Sports, cohosting the popular show Brother From Another. Holley is also a Professor of Journalism at Boston University. He lives in Massachusetts. You can follow him on Twitter @MichaelSHolley.