Stronghold: One Man's Quest to Save the World's Wild Salmon (Hardcover) 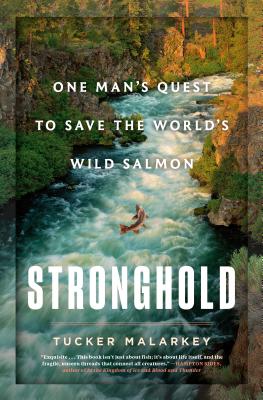 Stronghold: One Man's Quest to Save the World's Wild Salmon (Hardcover)


Special Order—Subject to Availability
PNBA BESTSELLER • “A powerful and inspiring story. Guido Rahr’s mission to save the wild Pacific salmon leads him into adventures that make for a breathtakingly exciting read.”—Ian Frazier, author of Travels in Siberia

In the tradition of Mountains Beyond Mountains and The Orchid Thief, Stronghold is Tucker Malarkey’s eye-opening account of one of the world’s greatest fly fishermen and his crusade to protect the world’s last bastion of wild salmon. From a young age, Guido Rahr was a misfit among his family and classmates, preferring to spend his time in the natural world. When the salmon runs of the Pacific Northwest began to decline, Guido was one of the few who understood why. As dams, industry, and climate change degraded the homes of these magnificent fish, Rahr saw that the salmon of the Pacific Rim were destined to go the way of their Atlantic brethren: near extinction.

An improbable and inspiring story, Stronghold takes us on a wild adventure, from Oregon to Alaska to one of the world’s last remaining salmon strongholds in the Russian Far East, a landscape of ecological richness and diversity that is rapidly being developed for oil, gas, minerals, and timber. Along the way, Rahr contends with scientists, conservationists, Russian oligarchs, corrupt officials, and unexpected allies in an attempt to secure a stronghold for the endangered salmon, an extraordinary keystone species whose demise would reverberate across the planet.

Tucker Malarkey, who joins Rahr in the Russian wilderness, has written a clarion call for a sustainable future, a remarkable work of natural history, and a riveting account of a species whose future is closely linked to our own.

“This book isn’t just about fish, it’s about life itself and the fragile unseen threads that connect all creatures across this beleaguered orb we call home. Guido Rahr’s quest to save the world’s wild salmon should serve as an inspiration—and a provocation—for us all, and Tucker Malarkey’s exquisite book captures Rahr’s weird and wonderful story with poignancy, humor, and grace.”—Hampton Sides, author of In the Kingdom of Ice and Blood and Thunder

“A crazy-good, intensely lived book that reads like an international thriller—only it’s our beloved salmon playing the part of diamonds or oil or gold.”—David James Duncan, author of The River Why and The Brothers K
Tucker Malarkey is the author of the critically acclaimed and nationally bestselling novels An Obvious Enchantment and Resurrection. Her career began at the Washington Post, her love of human culture and wilderness have since taken her all over the world. She now lives with her son in Berkeley, California. Malarkey grew up fly-fishing, studied Sovietology, and has traveled to Russia numerous times. Stronghold is her first major work of nonfiction.
“The Melvillian showdown between this extraordinary man and his equally extraordinary quarry forms the climax of Stronghold. . . . Rahr’s passion for salmon is contagious, and Malarkey channels it well. [She] is a novelist by trade, and it shows.”—Nate Blakeslee, The New York Times Book Review

“An on-the-ground and in-the-stream view of an unconventional salmon savant. Unflashy but effective prose that may remind you of Ian Frazier and John McPhee.”—San Francisco Chronicle

“Remarkable . . . Malarkey conveys the art of [Rahr’s] fly-fishing and the evolution of his expansive knowledge [and captures his] purity, determination, and adroit handling of both prominent Americans and Russian oligarchs, born of his drive to protect ‘stronghold’ rivers—unspoiled by human development.”—The National Book Review

“[Stronghold] has plenty to intrigue and inspire.”—The Oregonian

“Environmental writing as clear as the world’s most pristine waters . . . the journalistic equivalent of snagging an elusive, 80-pound trophy taimen on a fly.”—Heller McAlpin, The Wall Street Journal

“All fishermen know that we have to fight to save the waters we love. Stronghold tells a captivating story of the struggle to save the last great salmon rivers.”—Johnny Morris, founder/owner of Bass Pro Shops, owner of Cabela’s

“Stronghold lets us tag along on the unpredictable adventure that is loving nature, and spares us neither its sacrifices nor its rewards. It's a book for everyone who has wished for a place where life is defended and upheld—for a place on earth that will make us whole.”—Hope Jahren, author of Lab Girl

“The wild salmon is the world’s most wondrous, most improbable fish, with a life that is epic, heroic, and tragic. Malarkey’s narrative action, pacing, and human hero—Guido Rahr—all rise to the level that the subject requires. With our nets, dams, and clear-cutting, we do salmon no favors and add greatly to their tragedy. This book is about a man who is in many ways a passionate master of fighting for one of earth’s living miracles. And within his story are many lessons for how to lead, get things done, and hold on to the imperative to keep at it—no matter what.”—Carl Safina, author of Song for the Blue Ocean and Beyond Words

“In this compelling journey of discovery, Tucker Malarkey tells the story of a visionary who never fit with ‘normal’ society but came to understand in the deepest way how the Pacific salmon helped create—and possibly could help save—the precious wild ecosystems of the Pacific Rim.”—Peter Stark, author of Young Washington and Astoria

“As a passionate admirer of all that mother nature provides to give life authentic meaning, I am in awe of wild salmon. Read Stronghold, the remarkable account of one man who is making a difference in our time on this precious planet.”—Tom Brokaw

“Stronghold is first and foremost a story of adventure, danger, and intrigue. Full of surly Russian bush pilots, specially bred bear-defense huskies, and close-up encounters with salmon and taimen in some of the last unexplored waters on earth.”—Fly Fisherman Magazine

“When I’d gotten only a few pages into Tucker Malarkey’s Stronghold, I realized someone could write as well as [Laura] Hillenbrand. Make a sentence forcing me to read it over and over in pure disbelief and wonderment. I had a love affair with wordsmithing extraordinaire, again.”—Fly Life Magazine

“[A] captivating narrative . . . Malarkey effortlessly glides among topics, making for an excellent mix of adventure, geopolitical dealmaking, and ecological and environmental reporting.”—Publishers Weekly

“A vigorously told story of environmental activism that has succeeded despite the odds and an engaging journey into some of the planet’s wilder places.”—Kirkus Reviews