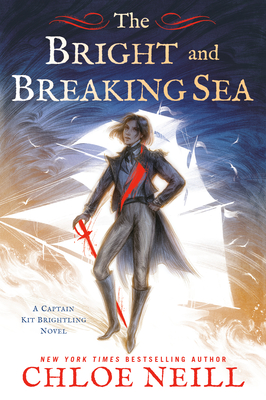 This is book number 1 in the A Captain Kit Brightling Novel series.

Chloe Neill brings her trademark wit and wild sense of adventure to a stunning seafaring fantasy starring a dauntless heroine in a world of magic and treachery.

Kit Brightling, rescued as a foundling and raised in a home for talented girls, has worked hard to rise through the ranks of the Isles’ Crown Command and become one of the few female captains in Queen Charlotte's fleet. Her ship is small, but she's fast—in part because of Kit’s magical affinity to the sea. But the waters become perilous when the queen sends Kit on a special mission with a partner she never asked for.

Rian Grant, Viscount Queenscliffe, may be a veteran of the Continental war, but Kit doesn’t know him or his motives—and she’s dealt with one too many members of the Beau Monde. But Kit has her orders, and the queen has commanded they journey to a dangerous pirate quay and rescue a spy who's been gathering intelligence on the exiled emperor of Gallia.

Kit can lead her ship and clever crew on her own, but with the fate of queen and country at stake, Kit and Rian must learn to trust each other, or else the Isles will fall....
Chloe Neill is the New York Times and USA Today bestselling author of the Captain Kit Brightling, Heirs of Chicagoland, Chicagoland Vampires, Devil’s Isle, and Dark Elite novels. She was born and raised in the South, but now makes her home in the Midwest, where she lives with her gamer husband and their bosses/dogs, Baxter and Scout.  Chloe is a voracious reader and obsessive Maker of Things; the crafting rotation currently involves baking and quilting. She believes she is exceedingly witty; her husband has been known to disagree. Learn more about Chloe and her books at: chloeneill.com
"The Bright and Breaking Sea is an utter delight. I deeply enjoyed my voyage with Kit Brightling and her loyal and charming crew and would happily sail with them anywhere."--Kat Howard, Alex Award-winning author of An Unkindness of Magicians

"A heroine worth cheering for and some magic I wish I could tap into myself. Set sail with Captain Kit Brightling; you'll like the cut of this story's jib."--Kevin Hearne, New York Times bestselling author of Ink & Sigil

"Magic and sea battles set in a world that gives more than a nod to the Napoleonic wars--entertaining and fun!"--Patricia Briggs, #1 New York Times bestselling author of Smoke Bitten

“The diverse crew, sea battles, intrigue, treason, class and gender infighting, and the attraction between Kit and Grant will appeal to fans of historical military fantasies like Naomi Novik’s Temeraire series. Readers will eagerly anticipate the next exciting adventure.”—Booklist

"Neill's creative reinterpretation of the Napoleonic Wars is diverse and gripping, and the growing bond between the well-matched Kit and Grant is sure to conquer readers' hearts."--Publishers Weekly

"Readers who enjoy adventure, intrigue and a touch of magic will be swept away by Chloe Neill's seafaring historical fantasy and its devoted and supremely competent captain."–Shelf-Awareness.com

“A fast-paced tale of high adventure, featuring naval battles, the rescue of a prisoner from a pirate stronghold, the hunt for traitors. And heroes, male and female both, with superior talents to get the job done. The writing is taut and witty."–Historical Novel Society