The Greek Histories: The Sweeping History of Ancient Greece as Told by Its First Chroniclers: Herodotus, Thucydides, Xenophon, and Plutarch (Hardcover) 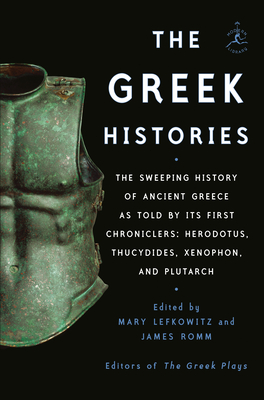 The Greek Histories: The Sweeping History of Ancient Greece as Told by Its First Chroniclers: Herodotus, Thucydides, Xenophon, and Plutarch (Hardcover)


In Stock—Click for Locations
From the leading scholars behind The Greek Plays, a collection of the best translations of the foremost Greek historians, presenting a sweeping history of ancient Greece as recorded by its first chroniclers

“Just the thing to remind us that human history, though lamentably a work in progress, is always something we can understand better.”—Sarah Ruden, translator of The Gospels and author of The Face of Water

The historians of ancient Greece were pioneers of a new literary craft; their work stands among the world’s most enduring and important legacies and forms the foundation of a major modern discipline. This highly readable edition includes new and newly revised translations of selections from Herodotus—often called the “father of history”—Thucydides, Xenophon, and Plutarch, the four greatest Greek innovators of historical narrative. Here the reader will find their most important, and most widely taught, passages collected in a single volume. The excerpts chart the landmark events of ancient Greece and provide a comprehensive account of the entire classical Greek age.

From the start the Greek historians demonstrated how broad and varied historical writing could be and brought their craft beyond a mere chronicle of past events. This volume explores each author’s interest in religion, leadership, character, and the lessons of war. How, for instance, should readers interpret Herodotus’ inclusion of speeches and dialogues, dreams, and oracles as part of the “factual” record? What did Thucydides understand about human nature that (as he said) stays constant throughout time? How did Plutarch frame historical biography as a means of depicting the moral qualities of great men?

Complete with introductions to the works of each historian, footnotes providing context and explaining obscurities, maps, and an appendix on the Greek conduct of war, this volume is an invaluable resource for students and passionate readers of history alike.
Mary Lefkowitz is the Andrew W. Mellon Professor in the Humanities emerita at Wellesley College. A recipient of the National Humanities Award, Lefkowitz is the author and editor of numerous articles and books, including Euripides and the Gods; Greek Gods, Human Lives: What We Can Learn from Myths; Women in Greek Myth; and Women’s Life in Greece and Rome.

James Romm is the James H. Ottaway Jr. Professor of Classics at Bard College and the author of several books, including The Sacred Band: Three Hundred Theban Lovers Fighting to Save Greek Freedom and Ghost on the Throne: The Death of Alexander the Great and the War for Crown and Empire. He has edited numerous translations of ancient Greek texts, including the Anabasis of Arrian for the volume The Campaigns of Alexander in the distinguished Landmark Ancient Histories series.
“Greek prose history, arising from and evolving around questions of truth and fact, made a major contribution to efforts to see the world more objectively. This astute selection of texts, intelligently and accessibly interconnected and in highly readable translations, is just the thing to remind us that human history, though lamentably a work in progress, is always something we can understand better.”—Sarah Ruden, translator of The Gospels and author of The Face of Water

“The tried and tested team of Lefkowitz and Romm have done it again. After their The Greek Plays comes this equally judicious selection, sparely but serviceably commented, from three of the major ancient Greek historians and the doyen of ancient historical biography. Translated by diverse hands and covering the three centuries from the sixth to the third BC, the readings informatively and entertainingly embrace some of the most momentous events of the ancient Hellenic world, from Cyrus of Persia to Alexander of Macedon, Greece—and Persia.”—Paul Cartledge, author of Democracy: A Life