Fire and Flood: A People's History of Climate Change, from 1979 to the Present (Hardcover) 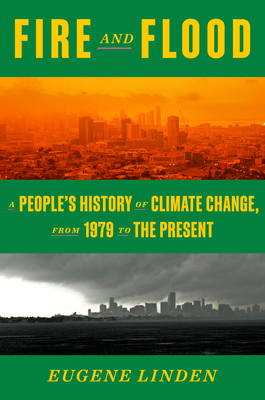 Fire and Flood: A People's History of Climate Change, from 1979 to the Present (Hardcover)


On Our Shelves Now at:
From a writer and expert who has been at the center of the fight for more than thirty years, a brilliant, big-picture reckoning with our shocking failure to address climate change. Fire and Flood focuses on the malign power of key business interests, arguing that those same interests could flip the story very quickly—if they can get ahead of a looming economic catastrophe.

Eugene Linden wrote his first story on climate change, for Time magazine, in 1988; it was just the beginning of his investigative work, exploring all ramifications of this impending disaster. Fire and Flood represents his definitive case for the prosecution as to how and why we have arrived at our current dire pass, closing with his argument that the same forces that have confused the public’s mind and slowed the policy response are poised to pivot with astonishing speed, as long-term risks have become present-day realities and the cliff’s edge is now within view.

Starting with the 1980s, Linden tells the story, decade by decade, by looking at four clocks that move at different speeds: the reality of climate change itself; the scientific consensus about it, which always lags reality; public opinion and political will, which lag further still; and, perhaps most important, business and finance. Reality marches on at its own pace, but the public will and even the science are downstream from the money, and Fire and Flood shows how devilishly effective moneyed climate-change deniers have been at slowing and even reversing the progress of our collective awakening. When a threat means certain but future disaster, but addressing it means losing present-tense profit, capitalism’s response has been sadly predictable.

Now, however, the seasons of fire and flood have crossed the threshold into plain view. Linden focuses on the insurance industry as one loud canary in the coal mine: fire and flood zones in Florida and California, among other regions, are now seeing what many call “climate redlining.” The whole system is teetering on the brink, and the odds of another housing collapse, for starters, are much higher than most people understand. There is a path back from the cliff, but we must pick up the pace. Fire and Flood shows us why, and how.
Eugene Linden is an award-winning journalist and writer on science, nature, and the environment. He is the author of nine books of nonfiction and one novel. His previous book on climate change, The Winds of Change, explores the connection between climate change and the rise and fall of civilizations, and was awarded a Grantham Prize Award of Special Merit. For many years, Linden wrote about nature and global environmental issues for Time, where he garnered several awards including the American Geophysical Union’s Walter Sullivan Award.

“In fascinating detail, Linden’s Fire and Flood tours the American scientific and political landscape that first grasped the fact of climate change and then forgot about it.” —Washington Post

“A detailed account of climate science and policy. . . . Linden is a clear, concise writer. He knows his climate science, and Fire and Flood makes points that stay with you.” —San Francisco Chronicle

“Veteran environmental journalist Eugene Linden cuts through the thickets of information to deftly guide the reader towards knowledge that is urgently required in this troubling age.” —BBC History Magazine

“Award-winning journalist and author Eugene Linden submitted the manuscript for Fire and Flood: A People’s History of Climate Change from 1979 to the Present months before Vladimir Putin made his move on Ukraine, but his account of the past 50 years of climate politics will help readers make sense of these fossil-fueled responses to the war. . . . always engaging . . . Linden’s new book does, in the end, justify an odd sort of optimism.” —Yale Climate Connections

“This sobering and accessible history deftly outlines government failures, missed opportunities and the steps we can take to turn the tide.” —BookPage (starred review)

“An essential retelling of how greed, apathy, and sabotage got us to this terrible place.” —Dan Vergano, BuzzFeed science reporter

“Linden is both an investigative reporter on [climate change] and a former investment strategist, and as such, his approach is an across-the-aisle tour de force that pulls no punches and does not offer absolution. . . . [T]his in-depth, expertly researched, but eminently readable title should be on every person’s bookshelf. Linden combines his analysis with solutions as to where humanity should and may go, and those solutions should surprise, enrage, and enlighten readers. Of the many books written on climate change and how humanity has gotten to where it is and where it needs to go, this is one of the most essential.” —Library Journal (starred review)

“Linden pulls no punches in this urgent look at the causes and progression of climate change, the science that proved its existence, and what could have been done to mitigate it. . . . The result is a damning account of the climate crisis.” —Publishers Weekly (starred review)

“A fascinating slice of climate history, notable especially for its focus on the insurance industry—which understood early on that we faced a crisis, but couldn't bring itself to break with the business consensus and make the kind of changes that would have resonated. This will be a telling story for a long time to come (assuming we're around to hear it).” —Bill McKibben, author of Falter: Has the Human Game Begun to Play Itself Out?