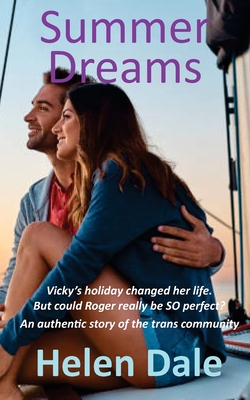 "Summer Dreams" is an authentic story of the transgender community and illustrates the wide range of trans people's experiences, the problems, prejudices and fears that they face (and some of their own prejudices) - and the fact that being trans is just one facet of their lives. It was inspired by a true incident when the author was about 19.

But let Vicky tell you about Summer Dreams:

"I was sunbathing in sand dunes near Bournemouth in 2003, when Roger found me and changed my life. After spending a heavenly holiday with him as Vicky, I just couldn't face reverting to David. I knew, though, that becoming Vicky permanently was impossible.

﻿"There was only one option, I tried to kill myself.

"Roger saved me then showed how life as Vicky was possible.

"Then I was asked to befriend Mia - a 17-year-old trans escort, obliged to provide high rolling clients with drugs, serving a prison sentence in a male establishment for drug dealing. We became friends - but that was threatened when I suspected Mia and Roger of having an affair."

Set in early 2000s against introduction of the Gender Recognition Act.

What Readers have said: "Brilliant" "LGBT meets Howard's Way" "A page turner" "Informs about trans issues without pushing it down the readers throat" "It's a really good introduction to transgender issues and a romantic novel very well written " "It's proper steamy" "John didn't put it down beginning of lockdown, kept saying his glasses were steaming up"