Claim No Easy Victories: The Legacy of Amilcar Cabral (Paperback) 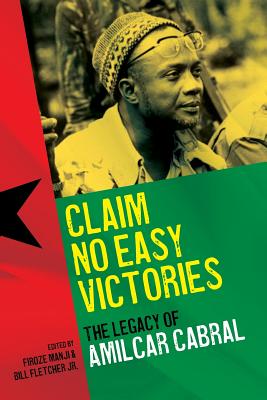 Claim No Easy Victories: The Legacy of Amilcar Cabral (Paperback)

2013 marked the 40th anniversary of the assassination of Amilcar Cabral, a revolutionary, poet, liberation philosopher, and leader of the independence movement of Guinea Bissau and Cap Verde. Cabral\'s influence stretched well beyond the shores of West Africa. He had a profound influence on the pan-Africanist movement and the black liberation movement in the US. In this unique collection of essays, contemporary thinkers from across Africa and internationally commemorate the anniversary of Cabral\'s assassination. They reflect on the legacy of this extraordinary individual and his relevance to contemporary struggles for self-determination and emancipation. The book serves both as an introduction, or reintroduction, to one whom global capitalism would rather see forgotten. Understanding Cabral sheds light on the necessity of grounding radical change in the creation of theory based on the actual conditions within which a movement is attempting to develop. Cabral\'s theoretical ideas and revolutionary practice of building popular movements for liberation are assessed by each of the authors as critically relevant today. His well-known phrase \"Claim no easy victories\" resonates today no less than it did during his lifetime. The volume comprises sections on Cabral\'s legacy; reflections on the relevance of his ideas; Cabral and the emancipation of women; Cabral and the pan-Africanists; culture and education; and Cabral\'s contribution to African American struggles. A selected bibliography provides an overview of Cabral\'s writings and of writings about Cabral.

Firoze Manji is head of CODESRIA's Documentation and Informa- tion Centre. He is the founder and former editor in chief of Pambazu- ka News (www.pambazuka.org) and Pambazuka Press/Fahamu Books (www.fahamubooks.org), and founder and former executive director of Fahamu, Networks for Social Justice (www.fahamu.org). Amongst other books, he coedited African Awakening: The Emerging Revolutions (Pambazuka Press, 2011) with Sokari Ekine. He is an associate fellow at the Institute for Policy Studies (IPS) in Washington, DC, visiting fellow at Kellogg College, University of Oxford, and board member of the Institute for Agriculture and Trade Policy. He is on Facebook and Twitter. Bill Fletcher, Jr. is a racial justice, labor, and international activist based in the United States. He is an editorial board member of BlackCommentator.com; senior scholar with the Institute for Pol- icy Studies; the immediate former president of TransAfrica Forum; the coauthor (with Dr. Fernando Gapasin) of Solidarity Divided; and the author of They're Bankrupting Us-And Twenty Other Myths about Unions. He can be reached at billfletcherjr@gmail.com. His website is www.billfletcherjr.com. He is on Facebook and Twitter.