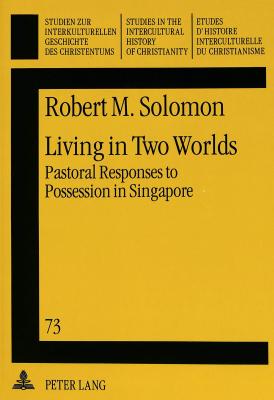 
Special Order—Subject to Availability
(This book cannot be returned.)
This is a study of Singapore pastors' worldview & understanding of the epidemiology, symptomatology and management of possession behaviour. The pastors' accounts are compared with those from the scientific disciplines, and convergences and divergences noted. Factors shaping both the pastors' and the scientific discourses are examined. The pastors are shown to respond to competing scientific paradigms by reinforcing their two-worlds worldview. They either live mainly in the other world, or in each world at a time, or between the two worlds. Based on theological reflection focusing on epistemology, theodicy & cosmology, the author shows that the paradigm of living in both worlds simultaneously is the most appropriate pastoral response. The theological vision of the coexisting worlds and the pastoral task of unmasking and resisting evil in all its varieties and depths are then discussed.
The Author: Robert Solomon studied medicine at the University of Singapore and worked as a medical doctor for several years before studying theology and intercultural studies in the Philippines, receiving his M.Div and M.I.S. degrees in 1984. He was ordained in the Methodist Church in Singapore in 1984 and pastored a Tamil Church from 1984 to 1989. He received his Ph.D. from Edinburgh University in 1993 and is currently lecturer in Pastoral theology and Registrar of the Graduate School of Trinity Theological College in Singapore.