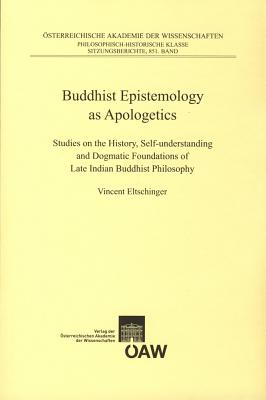 
Special Order—Subject to Availability
(This book cannot be returned.)
This book deals first with the historical and doctrinal foundations of Dharmakirti's religious philosophy. It points to a socio-historical context of Brahmanical hostility toward non- and anti-Vedic denominations (chapter 1), new patterns of Buddhist self-diction (chapter 2), reinvented models of theoretical and apologetical rationality (chapter 3), and the dogmatic infrastructure underlying Buddhist epistemology (chapter 4). It argues that Buddhist "Tantrism" and Buddhist "logic," two roughly contemporary phenomena that can be regarded as the main literary outcomes of the "early medieval" period, share interesting features in terms of polemical targets and self-understanding. Since the end of the fifth century, intra-Buddhist polemics have become less relevant (at least in the form it had had heretofore) and partly receded into the background in favor of inter- or cross-confessional controversies. Departing from Abhidharma and addressing new, predominantly non-Buddhist targets resulted in the abandonment of scholastic, confession-specific terminology and methods as well as the development of new models of theoretical and apologetical rationality: first, the construction of a clear-cut concept of reason(ing) as opposed to scripture; second, the gradual constitution of a concept of practical rationality that served the apologetic purpose of defending the very possibility, or rationality, of the Buddhist path. Finally, the book examines the extent to which Buddhist epistemology can be said to be Buddhist at all as regards its deeper doctrinal structure. It attempts to interpret the foundations of Buddhist epistemology - the apoha theory, the doctrine of the pramanas, etc. - as a rationalization and an apologetically updated version of Buddhist dogmas on the structure of ultimate and conventional realities, on the cognitive bases of error and its elimination, and on the cintamayi prajna ("insight born of reflection") as a salvific means of a predominantly inferential order.