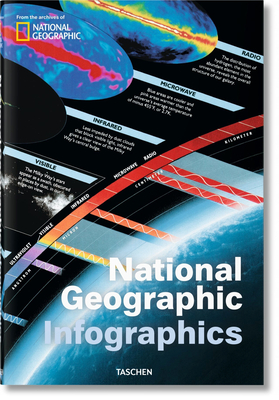 Back in the days when the information age was a distant dream and the world a more mysterious place, National Geographic began its mission to reveal the wonders of history, popular science, and culture to eager audiences around the globe. Since that 1888 launch, the world has changed; empires have risen and crumbled and a galaxy of information is today only a click away. But National Geographic endures; its calm, authoritative voice is as respected as ever amid the surfeit of data in our daily lives.

In this new anthology, TASCHEN and National Geographic gather the magazine's best infographics of the past 128 years. Through seven sections--History, The Planet, Being Human, Animal World, World of Plants, Science & Technology, and Space--we encounter the rise and fall of the Roman Empire, the mysterious origins of the Easter Island statues, Cleopatra's Alexandria, and the anatomy behind a cheetah's extraordinary speed. We discover how our genetic patterns have been pieced together over the years and how birds make music; we get to grips with global warming and explore our ever-expanding study of an ever-expanding universe.

With an essay by Nigel Holmes, charting the evolution of National Geographic over the decades and its pioneering use of graphics, as well as five fold-outs mimicking original pull-outs or inserts in the magazine, the book stands as a defining record of one of the world's best-known publications as well as a beautifully presented repository of accessible discovery and learning. Visualizing the histories, facts, and figures that make up our planet and our species, National Geographic Infographics is as true to the magazine's original mission as ever--an anchor of knowledge and a wunderkammer of discovery for young and old alike.