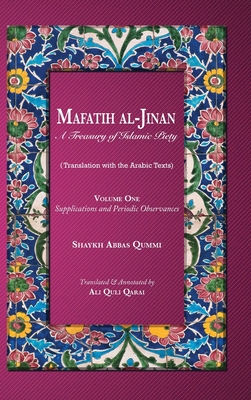 Among the religious traditions of humanity the Imami Shi'ah tradition within Islam is unmatched in its rich corpus of devotional texts (du'a and ziyarah literature) handed down from the original leaders of the faith, the Prophet Muhammad and the Imams of his family, the Ahl al-Bayt.The Mafatih al-Jinan is the most popular manual of Islamic devotional observances and prayer-texts by Shaykh Abbas Qummi, which draws its contents from well-known, reliable sources. As a manual of devotional literature, the Mafatih al-Jinan follows a long tradition established by the Misbah al-Mutahajjid of Shaykh Tusi (d. 460/1067) and followed up in the works of Sayyid Ibn Tawus (d. 664/1265), Kaf'ami (d. 905/1499) and others. Most of the contents of the Mafatih are drawn from these earlier works. Since its publication, the Mafatih has enjoyed an uncontested popularity among Farsi-speaking Muslims, and its Arabic and Urdu versions are widely used by the devout in the Arab world and the Indian subcontinent.