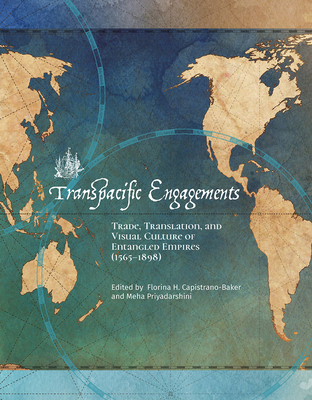 
On Our Shelves Now at:
This wide-ranging collection of scholarly essays explores the hybrid cultures, intellectual clashes, and dynamic exchanges of the transpacific region in the age of imperialism.

Between the sixteenth and nineteenth centuries, competing European empires vied for commercial and political control of oceanic routes between Asia and the Americas. Transpacific Engagements addresses the resulting cultural and artistic exchanges with an emphasis on the Spanish and American enterprises in the Asia-Pacific region. This volume explores artistic expressions of imperial aspirations and imaginaries in the Philippines, Spain, Japan, and Hawaii; the transformations of texts, images, and culinary practices as they moved from one cultural context to another; and the movement of objects and people across the transpacific, with particular attention to the Manila Galleon trade that flourished from 1565 to 1815.

Published by the Ayala Foundation, Inc. in association with the Getty Research Institute and Kunsthistorisches Institut in Florenz (Max-Planck-Institut).

Florina H. Capistranobaker is the former director of the Ayala Museum and its current consulting curator and project consultant for international operations.

Meha Priyadarshini is assistant professor in the Department of History at the University of Edinburgh.