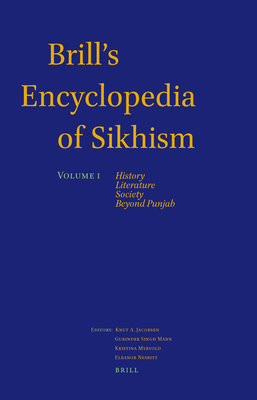 
Special Order—Subject to Availability
Edited by Knut A. Jacobsen and Gurinder Singh Mann (Editors-in-Chief) and Kristina Myrvold and Eleanor Nesbitt (Associate Editors)
Sikhism is one of the most important religious traditions of South Asian origin. Sikhs are historically connected to the Punjab region in South Asia, but their religious traditions are transnational and have a worldwide presence. The study of their history and traditions has become a significant field of scholarship and research, but no academic, authoritative, and up-to-date reference work exists. Brill's Encyclopedia of Sikhism aims to make available in-depth critical scholarship on all the main aspects of the Sikh traditions in a number of original essays written by the world's foremost scholars on Sikhs and Sikh traditions.
The encyclopedia is thematic and seeks to present a balanced and impartial view of the Sikh traditions in all their multiplicity and as both historical and contemporary institutions. The articles, published in two volumes, focus on history, literature, and the rich social landscape of the Sikh community; their practices, places, arts, and performances; specialists and leadership; migration both within South Asia and beyond; and contemporary issues and relations.
Knut A. Jacobsen is professor in the history of religions at the University of Bergen, Norway, and author of numerous publications on various aspects of religions in South Asia and in the South Asian diasporas.Gurinder Singh Mann taught Sikh studies at Columbia University, New York (1988-1999), and the University of California, Santa Barbara (1999-2015). He is currently the director of the Global Institute for Sikh Studies, New York, United States. Kristina Myrvold is associate professor of the study of religions at Linnaeus University, Sweden. She has directed several research projects on the Sikh religion and has published numerous works on Sikh religious practices and migration.Eleanor Nesbitt is professor emerita (religions and education) at the University of Warwick, Coventry, United Kingdom. She is a founder member of the Punjab Research Group and has published extensively on the Sikh tradition.