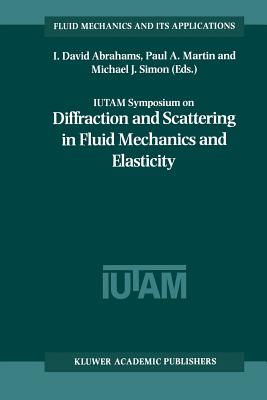 
Not On Our Shelves—Ships in 1-5 Days
These Conference Proceedings are intended to summarise the latest developments in diffraction and scattering theory as reported at the IU TAM Symposium on Diffraction and Scattering in Fluid Mechanics and Elasticity held in Manchester, England on 16-20 July 2000. This in formal meeting was organised to discuss mathematical advances, both from the theoretical and more applied points of view. However, its pri mary goal was to bring together groups of researchers working in dis parate application areas, but who nevertheless share common models, phenomenological features arising in such problems, and common math ematical tools. To this end, we were delighted to have four Plenary Speakers, Professors Allan Pierce, Ed Kerschen, Roger Grimshaw and John Willis FRS, who are undisputed leaders in the four thematic ar eas of our meeting (these are respectively acoustics, aeroacoustics, water or other free surface waves, elasticity). These Proceedings should offer an excellent vehicle for continuing the dialogue between these groups of researchers. The participants were invited because of their expertise and recent contributions to this field. Collectively, there were around 90 contrib utors to the Symposium from some 13 countries located all around the world. These included 45 speakers, 35 co-authors and about 10 other delegates. Individuals came from many of the major international cen tres of excellence in the field of scattering theory.