The Intelligence War in Britain: Public Perceptions of the UK Intelligence Agencies, Foreign Espionage, the Tory Party and its Response to the Salisbu (Hardcover) 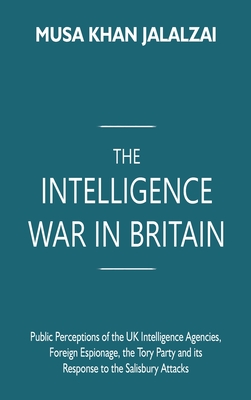 The Intelligence War in Britain: Public Perceptions of the UK Intelligence Agencies, Foreign Espionage, the Tory Party and its Response to the Salisbu (Hardcover)


Not On Our Shelves—Ships in 1-5 Days
(This book cannot be returned.)
The sound and cry of foreign espionage has reverberated in British newspapers for years while the British domestic intelligence agency (MI5) abruptly warned that Chinese intelligence agents were making things worse when they were introduced to parliamentarians in Britain. The MI5 said that a female Chinese national was engaged in political interference activities on behalf of Beijing. On 13 January 2022, Al Jazeera reported MI5's yelling against the Chinese woman, and alleged that she was working on behalf of the Chinese Communist party. MI5's own interference alert, which was circulated to parliamentarians, said anyone contacted by the woman should be "mindful of her affiliation" and its "remit to advance the CCP's agenda". The Chief of the MI6 warned that China and Russia were racing to master artificial intelligence in a way that could revolutionise geopolitics over the next 10 years. Director General of MI6, Richard Moore also argued that MI6 needed to adapt to new technology to survive. Mr. Moore's public speech envisaged adaptation of artificial intelligence quantum computing and digital technology to completely transform the way human intelligence gathered by spies, presenting MI6 with major challenges in the digital age. The MI6, MI5, GCHQ and EU intelligence agencies uncovered a Russian GRU plane to attack the EU and UK national critical infrastructure, businesses, and state institutions by effectuating and carrying out reckless cyber-attacks. Notwithstanding the introduction of the Mass Surveillance System and monitoring programme that deeply collect sensitive information about foreign espionage, foreign intelligence agencies in London maintain espionage networks. This book casts a flashlight on the broader challenges of state security, Intelligence espionage, and the secret war in Britain. As we experienced the COVID-19 pandemic placed a huge strain on the State, the state and government's response to the multifaceted crisis was underwhelming.