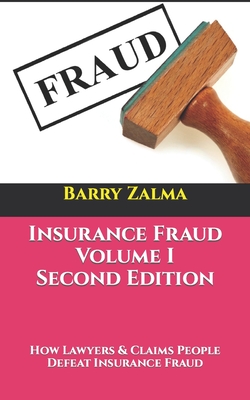 
Not On Our Shelves—Ships in 1-5 Days
(This book cannot be returned.)
INSURANCE FRAUD IS EPIDEMIC Insurance fraud continually takes more money each year than it did the last from the insurance buying public. There is no certain number. No one knows the amount that is taken by insurance fraud because most attempts at insurance fraud succeed. Estimates of the extent of insurance fraud in the United States range from $87 billion to more than $300 billion every year. The only certainty is that it is a serious crime that bleeds the insurance industry sufficiently to have states compel insurers to create special investigative units (SIU's) to investigate, deter and defeat insurance fraud to assist the state in its efforts to prosecute the crime. Insurers and government backed pseudo-insurers can only estimate the extent they lose to fraudulent claims. Lack of sufficient investigation and prosecution of insurance criminals is endemic. Most insurance fraud criminals are not detected. Those that are detected do so because they became greedy, sloppy and unprofessional so that the attempted fraud becomes so obvious it cannot be ignored. The National Insurance Crime Bureau (NICB) estimated that almost 25% of the bodily injury claims related to auto crashes are bogus. Property and casualty claims against auto insurance are not much better, coming in at around a 10% fraud rate.
The National Association of Insurance Commissioners (NAIC) reports that insurance fraud occurs when an insurance company, agent, adjuster or consumer commits a deliberate deception in order to obtain an illegitimate gain. It can occur during the process of buying, using, selling, or underwriting insurance. Insurance fraud may fall into different categories from individuals committing fraud against consumers to individuals committing fraud against insurance companies. Non-medical insurance fraud is estimated at over at $40 billion dollars per year. Fraud not only inflicts extra costs on insurance companies, but it also financially impacts consumers, costing the average U.S. family between $400 and $700 per year in premiums. When insurers and governments put on a serious effort to reduce the amount of insurance fraud the number of claims presented to insurers and the pseudo-government-based or funded insurers drops logarithmically.
Insurance fraud is not limited to the US. In Britain fraud costs the British economy amounts estimated in billions of British pounds. Since the amount of fraud actually detected is a small portion of what was actually found, the estimates published are little more than an educated guess. Vendors and organizations include the Coalition Against Insurance Fraud (CAIF), CSC, Detica NetReveal, Equifax, Experian, FICO, IBM, Innovation Group, Insurance Bureau of Canada (IBC), ISO/Verisk, KPMG, LexisNexis, FastCase, Mattersight, Mitchell, the National Insurance Crime Bureau (NICB), SAP, SAS, and TransUnion. No matter how seriously the insurers work to prove fraud the authorities often ignore them. In response, police and prosecutors complain that the insurers do nothing that police and prosecutors can use to prosecute the crime of insurance fraud while insurers complain that prosecutors ignore them when they present evidence of a fraud. There is truth in both complaints. Insurers, although compelled by statute to investigate potential insurance fraud and to present the results of their investigations to prosecutors, they are not trained as police officers. Insurance company employees, whether claims adjusters or SIU investigators are not trained to present evidence of a crime to a court. They can only advise professional insurance fraud investigators at the state departments of insurance or state police agencies who must then investigate further to obtain evidence that is sufficient for a charge of insurance fraud or to convince a Grand Jury to issue an indictment.