The Complete Federalist and The Anti-Federalist Papers: The Articles of Confederation, The Constitution of Declaration, The Preamble to The Bill of Ri (Paperback) 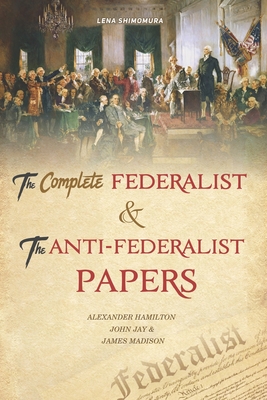 The Complete Federalist and The Anti-Federalist Papers: The Articles of Confederation, The Constitution of Declaration, The Preamble to The Bill of Ri (Paperback)

This book included eighty-five articles explains and defends the ideals behind the highest form of law in the United States - An authoritative analysis of the Constitution of the United States and an enduring classic of political philosophy. It's an excellent reference, for anyone who wants a better understanding of the Constitution The essays were written and published anonymously in New York newspapers during the years 1787 and 1788 by three of the Constitution's framers and ratifiers: Alexander Hamilton, General George Washington's Chief of Staff and first Secretary of the Treasury; John Jay, the first Chief Justice of the United States; and James Madison, father of the Constitution, author of the Bill of Rights, and fourth President of the United States.
Thomas Jefferson hailed The Federalist Papers as the best commentary ever written about the principles of government. Milestones in political science and enduring classics of political philosophy, these articles are essential reading for students, lawyers, politicians, and those with an interest in the foundation of U.S. government and law.

Although the authors of The Federalist Papers foremost intended to influence the vote in favor of ratifying the Constitution, in Federalist No. 1 Hamilton explicitly set their debate in broader political terms. "It has been frequently remarked," he wrote, "that it seems to have been reserved to the people of this country, by their conduct and example, to decide the important question, whether societies of men are really capable or not of establishing good government from reflection and choice, or whether they are forever destined to depend for their political constitutions on accident and force."

Though centuries old, these timeless essays remain the benchmark of American political philosophy. As eloquently stated by famed historian Richard B. Morris, The Federalist Papers serve as an "incomparable exposition of the Constitution, a classic in political science unsurpassed in both breadth and depth by the product of any later American writer."