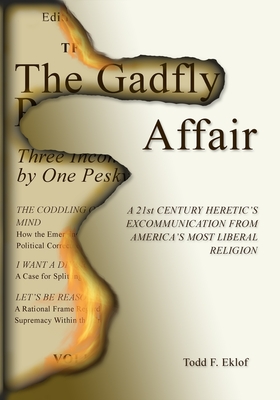 
Not On Our Shelves—Ships in 1-5 Days
(This book cannot be returned.)
Freedom, reason, tolerance. These are the values American Unitarianism was founded upon in the late 18th century: the same Enlightenment principles that had also inspired the nation's founders. Until recently, it was unthinkable that this liberal religion would be capable of banning books and silencing dissenters. But this is precisely what happened after Unitarian Universalist minister Todd Eklof wrote his book, "The Gadfly Papers: Three Inconvenient Essays by One Pesky Minister." Just hours after he began distributing it during the Unitarian Universalist Association's 2019 General Assembly, he was surrounded by five angry representatives of the Association, chastising him for the "harm" he was causing with a book none of them had read. Before the day ended, he was banned from returning to the Assembly and boxes of his book were soon confiscated and thrown away. He was then publicly condemned by hundreds of his colleagues in a letter calling his book racist, homophobic, transphobic, ableist, and classist, without citing a single example from within its pages. "The Gadfly Affair" is this 21st century heretic's gripping and meticulously documented account of what transpired between the time he was banned and eventually excommunicated from America's most liberal religion. "The Gadfly Affair" further exposes the ideological intolerance now manifesting in progressive organizations everywhere, a social phenomenon that is ushering the whole of Western culture into a new Dark Ages. "The Gadfly Affair" is about finding the moral courage to respond to what's happening in our society with the same forces that have always illuminated humanity's path in the darkest of times-freedom, reason, and tolerance.