Sum and Substance: Comprehending Yourself, Your Universe and Your World (Paperback) 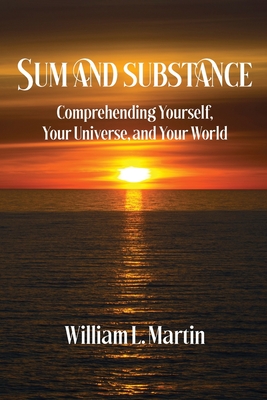 Sum and Substance: Comprehending Yourself, Your Universe and Your World (Paperback)

Sum and Substance leads you on a personal journey to a richer comprehension of your life; our universe, as revealed by science; and civilization, from the first humans to modern times. Richly illustrated and using language understandable by anyone who will try, the book offers the ambitious hope that if you spend eight hours reading it, you may learn more than in any other eight hours of your life.

The book first identifies where each of us fits in the universe, the use of the scientific method as the best way to understand reality, and a concise timeline of events beginning with the Big Bang. Next, we describe the path from the Big Bang to the appearance of modern humans. Third, we trace human history from the beginning to the present. Finally, we conclude by offering conjectures about the meaning of life and the possible futures of our beautiful planet Earth.

Because of their significance, separate chapters are dedicated to warfare; systems of belief, including the major religions and humanism; and environmental concerns. We analyze how great ideas come to fruition, and propose that seven specific ideas, each originating in a single mind, have great impact on everyone. We speculate about which technologies might have the greatest future impact.

Each chapter begins with two relevant quotes from great minds, and one chapter is dedicated to giving an overview of the book entirely in the words of others. These could trigger hours of your own thought, such as "Why is there something and not nothing?" (Leibniz) and "What is the use of a house if you haven't got a tolerable planet to put it on?" (Thoreau)

The tone is non-judgmental and suggests that the beginning of charity is knowing that we all experience reality individually. We recognize that everyone is unique and is the achievement of four billion years of evolution of life on Earth. The goal is not to tell you what to think, but to give you a foundation for comprehending everything you experience. The book shares how others have defined the meaning of their lives, and suggests that you can choose your own unique purpose.

COMPREHENDING YOURSELF - "You are the result of four billion years of development of life on Earth. You are amazing in at least four different ways. You are a wonder But perhaps the beginning of charity is to recognize that no one else experiences reality in exactly the same way you do."

COMPREHENDING YOUR UNIVERSE - "Beginning in the early 1900's and continuing to the present, the apparent certainty of classical physics was shattered in what might be described as an avalanche of genius."

CONJECTURE AND CONCLUSION - "It is conceivable that we are living in the only place and at the only brief moment of time when sentient creatures like you and me can comprehend the universe. You and I are two of the luckiest creatures ever to inhabit this universe."