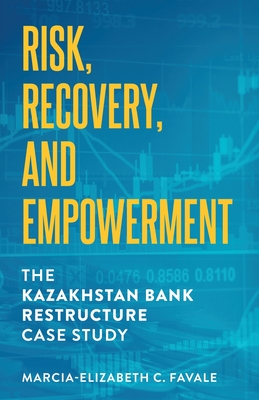 In February 2009, trying to navigate the financial crisis, the government of Kazakhstan took a decisive step in restructuring its three banks. Kazakhstan rejected the bailout strategy and rejected a bad bank/good bank framework. Risk, Recovery, and Empowerment is a qualitative, investigative analysis, told by the author, a finance partitioner who devised and led the implementation of the over $30 billion Burden-Sharing Framework that became an international benchmark and redefined trade finance by introducing the term and analysis of 'true trade finance'.

Before creating a tech startup (Blingby) and being awarded U.S. Patents, a Kazakhstan Patent, and Chinese Patents, Marcia-Elizabeth C. Favale (aka Favale-Tarter) had an illustrious career in finance. She was ranked by Institutional Investor Magazine as the "Top Analyst for Emerging Market Corporate Bond Research" (April 2006). She was the senior advisor to the prime minister of Kazakhstan (2009-2013) and the independent restructuring advisor to BTA Bank and Samruk-Kazyna, with her advisory firm ranked alongside UBS and Lazard as "CEE Restructuring Firm" by Euromoney Magazine (February 2010), amongst other accolades.