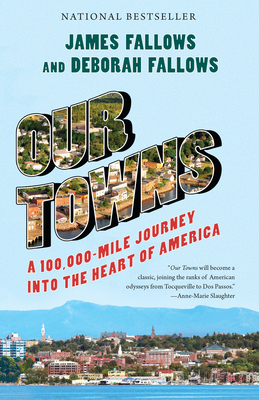 Our Towns: A 100,000-Mile Journey into the Heart of America (Paperback)


In Stock—Click for Locations
NATIONAL BESTSELLER • "James and Deborah Fallows have always moved to where history is being made.... They have an excellent sense of where world-shaping events are taking place at any moment" —The New York Times • The basis for the HBO documentary streaming on HBO Max

For five years, James and Deborah Fallows have travelled across America in a single-engine prop airplane. Visiting dozens of towns, the America they saw is acutely conscious of its problems—from economic dislocation to the opioid scourge—but it is also crafting solutions, with a practical-minded determination at dramatic odds with the bitter paralysis of national politics. At times of dysfunction on a national level, reform possibilities have often arisen from the local level. The Fallowses describe America in the middle of one of these creative waves.

Their view of the country is as complex and contradictory as America itself, but it also reflects the energy, the generosity and compassion, the dreams, and the determination of many who are in the midst of making things better. Our Towns is the story of their journey—and an account of a country busy remaking itself.
JAMES FALLOWS has been a national correspondent for The Atlantic for more than thirty-five years, reporting from China, Japan, Southeast Asia, Europe, and across the United States. He is the author of eleven previous books. His work has also appeared in many other magazines and as public-radio commentaries since the 1980s. He has won a National Book Award and a National Magazine Award. For two years he was President Jimmy Carter’s chief speechwriter.

DEBORAH FALLOWS is a linguist and writer who holds a PhD in theoretical linguistics and is the author of two previous books. She has written for The Atlantic, National Geographic, Slate, The New York Times, and The Washington Monthly, and has worked at the Pew Research Center, Oxygen Media, and Georgetown University. She and her husband have two sons and five grandchildren.
"James and Deborah Fallows have always moved to where history is being made.... They have an excellent sense of where world-shaping events are taking place at any moment—and a fervent commitment to be there to see it happen.... In these cities, the Fallows argue, citizen participants are coping with declining industries, creating new civic cultures, assimilating waves of immigration, and collaborating across party-lines to revive everything from arts programs to tech seedbeds."—David Brooks, The New York Times

"A tonic of a book about the can-do America unready to succumb to rot."—Roger Cohen, The New York Times

“I’ve been waiting for this book for years. . . . Buy this book. . . . This country is more united than divided...and this book will prove it.”—Joe Scarborough, co-host of Morning Joe on MSNBC

“Knowing the Fallows and their work, I assumed this new co-authored book of theirs would be typically savvy, sensitive, articulate and prescient. What I didn't expect was how a record of experiences of current middle American communities, through their lenses, would be such a page turner! I've guessed for many years that real change in this world would be effected by and within small communities—places where people feel connected and capable of impact on some larger scale. Our Towns is a monumental validation of that hypothesis—with real stories and real people, who are really getting things done. James & Deborah—thanks for your journey, your open and honest observations, and helping to shine light for us at the end of many tunnels.” —David Allen, author of Getting Things Done; the Art of Stress-Free Productivity

“Our Towns will become a classic, joining the ranks of American odysseys from De Tocqueville to Dos Passos. The landscape unfurls beneath us; the language of different regions echoes in our ears. Most important, this book is a tonic for what ails us as a nation, a captivating story of energy and renewal across the land.” —Anne-Marie Slaughter, President & CEO, New America

“In the tradition of John Steinbeck and Studs Terkel, the Fallows have crisscrossed the country in search of the extraordinary strength and character of ordinary people and places. What they’ve found—in towns we know and others off the beaten path—should give us all great hope for the future.” —California Governor Edmund G. Brown Jr.

"Reminiscent of Charles Kuralt's On The Road with Charles Kuralt, this unique look at the heart of America will bring hope and insight to readers. Highly recommended."—David Miller, Library Journal

“An illuminating trip through ‘parts of the country generally missed by the media spotlight.’ . . . Writing with lively curiosity and open minds, the couple have created textured portraits of 29 American cities, from Sioux Falls, South Dakota, to Allentown, Pennsylvania, and Eastport, Maine, to Redlands, California. . . . A well-reported, optimistic portrait of America’s future.” —Kirkus Reviews 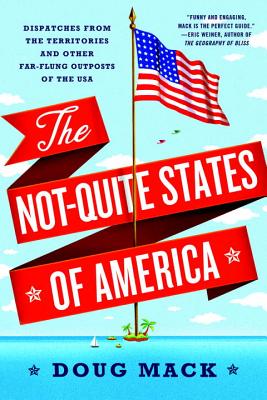 The Not-Quite States of America: Dispatches from the Territories and Other Far-Flung Outposts of the USA (Paperback)

“To truly understand the United States, one must understand The Not-Quite States of America.” —Mark Stein, best-selling author of How the States Got Their Shapes

Everyone knows that America is 50 states and… some other stuff. The U.S. territories—American Samoa, Guam, Puerto Rico, the Northern Mariana Islands, and the U.S. Virgin Islands—and their 4 million people are little known and often forgotten, so Doug Mack set out on a 30,000-mile journey to learn about them. How did they come to be part of the United States? What are they like today? And why aren’t they states? Deeply researched and richly reported, The Not-Quite States of America is an entertaining and unprecedented account of the territories’ crucial yet overlooked place in the American story.

Doug Mack is the author of Europe on Five Wrong Turns a Day and has written for Travel + Leisure, National Geographic Traveler, and the San Francisco Chronicle. He lives in Minneapolis.
Travel writing at its finest.
— Andrew Carroll, best-selling author of War Letters and Here Is Where

Mack includes you in all the fun of his journey.
— Michael Upchurch - Seattle Times

Mack catalogues his thirty-thousand-mile trek through [the territories], and examines the traits they have inherited from the U.S.—little-league games, star-spangled banners—and the cultural crisscross that makes them unique examples of America’s own hybridized culture.
— The New Yorker

A read you can’t put down and can’t quit rolling around in your mind afterward.
— Nichole L. Reber - Ploughshares

Witty and thoughtful, with plenty of vibrant characters and vivid descriptions, The Not-Quite States of America is also a well-researched history and a highly enjoyable travelogue. Frequent fliers and armchair travelers alike will relish Mack’s account.

A smart, funny meditation on the nature of American empire, Mack’s book has its poignant moments too, as he asks difficult questions about statehood and American identity.
— Jodie Vinson - The Longitude Blog

With an eye for irony and amusing detail, [Mack’s] travelogue is often hilarious yet inevitably thoughtful.
— David Luhrssen - Shepherd Express 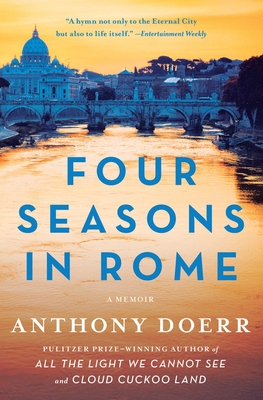 Four Seasons in Rome: On Twins, Insomnia, and the Biggest Funeral in the History of the World (Paperback)

In Stock—Click for Locations
From the author of the acclaimed Pulitzer Prize-winning #1 New York Times bestseller All the Light We Cannot See and Cloud Cuckoo Land, a "dazzling" (Azar Nafisi, author of Reading Lolita in Tehran) memoir about art and adventures in Rome.

Anthony Doerr has received many awards—from the New York Public Library, the National Endowment for the Arts, and the American Library Association. Then came the Rome Prize, one of the most prestigious awards from the American Academy of Arts and Letters, and with it a stipend and a writing studio in Rome for a year. Doerr learned of the award the day he and his wife returned from the hospital with newborn twins.

Exquisitely observed, Four Seasons in Rome describes Doerr's varied adventures in one of the most enchanting cities in the world. He reads Pliny, Dante, and Keats—the chroniclers of Rome who came before him—and visits the piazzas, temples, and ancient cisterns they describe. He attends the vigil of a dying Pope John Paul II and takes his twins to the Pantheon in December to wait for snow to fall through the oculus. He and his family are embraced by the butchers, grocers, and bakers of the neighborhood, whose clamor of stories and idiosyncratic child-rearing advice is as compelling as the city itself.

This intimate and revelatory book is a celebration of Rome, a wondrous look at new parenthood, and a fascinating story of a writer's craft—the process by which he transforms what he sees and experiences into sentences.
Anthony Doerr is the author of Cloud Cuckoo Land, which was a finalist for the National Book Award, and All the Light We Cannot See, winner of the Pulitzer Prize, the Carnegie Medal, the Alex Award, and a #1 New York Times bestseller. He is also the author of the story collections Memory Wall and The Shell Collector, the novel About Grace, and the memoir Four Seasons in Rome. He has won five O. Henry Prizes, the Rome Prize, the New York Public Library’s Young Lions Award, the National Magazine Award for fiction, a Guggenheim Fellowship, and the Story Prize. Born and raised in Cleveland, Ohio, Doerr lives in Boise, Idaho, with his wife and two sons.
"Anthony Doerr is dazzling in this book, in the way he celebrates the joys as well as the pain of being a parent and in love, being a writer and being in Rome, reminding us that certain experiences never grow stale when they are expressed through the fresh eyes of a real writer."
-- Azar Nafisi, author of Reading Lolita in Tehran

"Doerr's journal is a love letter written with the ear of a musician, the sensibility of a Buddha, the heart of an inamorato. Rome is the chosen beloved, but Doerr's true subject is writing."
-- Sandra Cisneros, author of Caramelo

"I loved this book which, in turn, made me laugh and weep at the relentless twins, Owen and Henry, who never sleep, the descriptions of Rome, the clouds, the light -- especially the light -- the people Doerr meets on the street, again the light, Pliny, Jonah's feet dangling from the Sistine Chapel ceiling, Shauna's steadfastness, Doerr's generous and intelligent spirit, his discerning eye and his perfect prose. Complimenti!"
-- Lily Tuck, author of Interviewing Matisse

"Anthony Doerr found himself in the perfect Eternal City with the eternal Paternal Problem: how to care for two beautiful newborn twins while still doing his work as a writer and student and observer. The result is a funny, precise, touching account of cultural barricades crossed and fatherly exhaustions overcome; a story of the universalities of parenting and the specificities of Roman life that will lift the heart of every parent and delight the mind of every lover of Italy."
-- Adam Gopnik, author of Through the Children's Gate and From Paris to the Moon